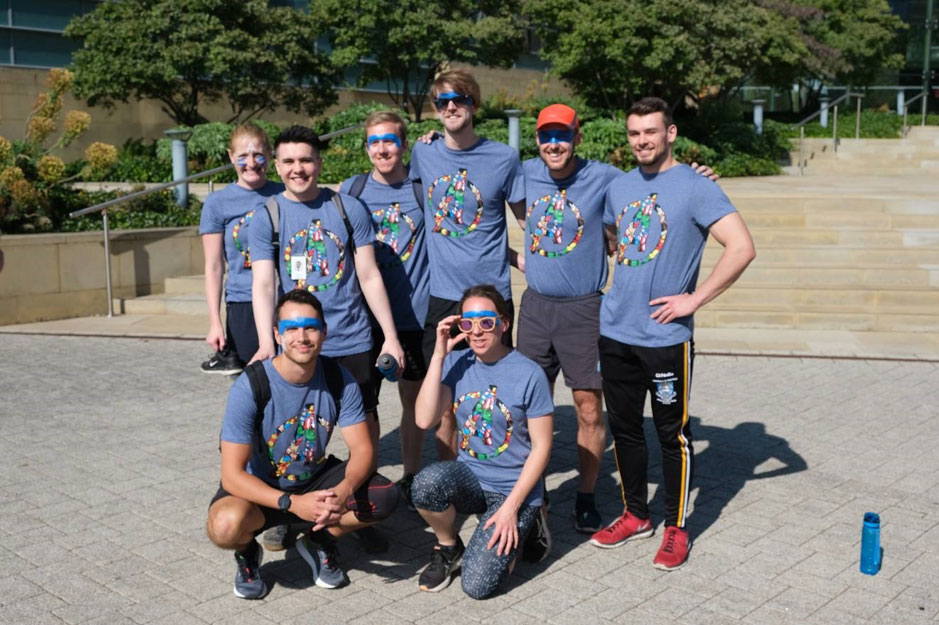 Another breakthrough from our bioanalytical team here at Alderley Park, this time in the form of the “Alderley Analytical Avengers,” who came top in the site’s annual “It’s a Knockout!” challenge!
On a Wednesday afternoon graced by blue skies and glorious summer sun, Alderley Park once again played host to the “It’s a Knockout!” challenge, an event run by the UK company KNOCKOUT CHALLENGE for charity events, team building and company fun days such as this. As with everything at Alderley Analytical, no effort was spared, and the “Alderley Analytical Avengers” turned out in force. 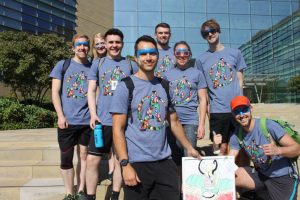 Clad in Avengers themed T-Shirts and Captain America face-paint (or blue monobrows), the team comprised of Project Leaders, Analysts and Quality Controllers alike, all of whom had been training rigorously in preparation, through intensive regimes such as QC checking (patience and focus training), 12-Channel pipette calibrations (endurance training) and post-delivery bubble wrap “disposal” (speed and coordination training).

The bioanalysis team were tested across 8 inflatable trials, each scored out of 10 depending on the team’s performance in relation to a target time or score. A “Joker” card (pictured below) was prepared beforehand, which gave each team the opportunity to earn extra points for effort, and double their points score on a game of their choice. 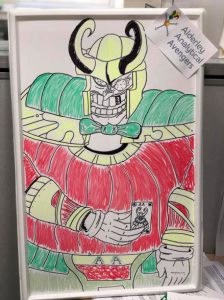 The Alderley Analytical Avengers Joker Card, “Joki.”
A twist on 2 comic mischief-makers in the form of Marvel’s “Loki” and DC’s “The Joker,” earning our team top points!

The first game consisted of a maze, through which the team had to run and retrieve pieces of a cake, before carefully carrying the intact confectionery back once complete. This was made easy by the safe hands of Connor and Nick, awarding the team their first 10 points of the day! 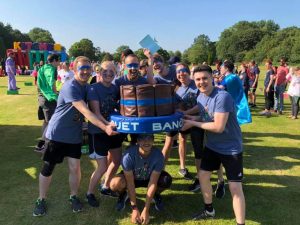 The next 2 events were a further test of the team’s speed, seeing the Avengers dash back and forth through a postal-themed inflatable to collect stamps, and a peas-in-a-pod themed game where balls had to be collected in a tube in order to free up a final yellow pea (as you can tell there was a very strict, consistent theme…). 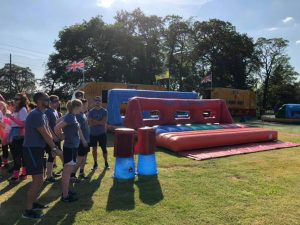 However, the final game of the first-half was the Avengers most testing trial so far, pitting the team against a communication and coordination-based task, whereby team members in comical blindfolded sausage costumes had to navigate a slalom of their team mates, using only verbal cues and some gentle physical redirection. Connor’s earlier cake-maze triumph was evened out by his initial inability to tell left from right under pressure, leaving the team behind by a lap. HOWEVER, never to be beaten, the Avengers once again pulled it out of the bag, recovering through an excellent cooperative effort and winning yet another game to secure 10 points and finish the first half with 38 out of 40. 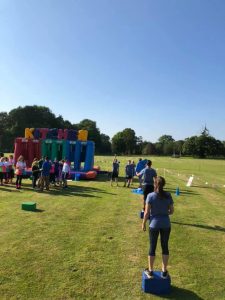 Silly sausages.
The team begin preparations with 3 members taking to the podiums and the rest donning their stylish sausage attire!

In the second half of the event, out came the suds! Each event contained an element of water (sometimes soapy) which provided plenty of laughs and necessitated a little more focus from the team.

In order to navigate the ensuing ball pit and water-collection challenges, the team discussed tactics of how to locate plastic balls hidden in foam, how to quickly fill up cups and how best to retain water in sponges- the usual day-to-day problems for a team of bioanalysts. These games proved harder than the original 4, handing the team their lowest score of the day with an 8 in the penultimate task (a later audit determined the root cause as defective sponges).

The final game was by far the highlight of the day, consisting of a rope ladder followed by a slippery descent down a slide, with the goal of retrieving stamps for a suitcase. The ladies on the team showed the men how it was done, making light work of the rope ladder, and with Connor leading the pack head-first (quite literally) it was another 10 points and an end to the games.

The games keepers totalled up the scores, including points for outfits, jokers and mascots, giving the team some time for a well needed rest and a quick bite to eat! 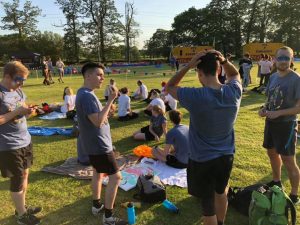 Results time!
The team take a moment to catch their breath before the final awards ceremony

As the teams were summoned forwards for the final scores, the team names were reeled off in reverse order and “The Alderley Analytical Avengers” remained elusive… The Avengers were definitely in the top 10 out of the 16 entrants. The names continued to be read, down to the last 6, and then 5… a joint fourth place was announced… and then onto the podium finishes.

Third place announced… still not the Avengers! Down to the final 2 and it was a guaranteed silver! But the Avengers turned up to win, and as second place was announced, the team couldn’t help but celebrate the victory- first place in It’s a Knockout 2019! A solid improvement on last years mid-table finish and a delighted team back in the offices the next day! 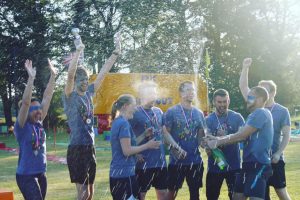 Thank you from everyone at Alderley Analytical to those who helped organise the day, and all those who took part! We thoroughly enjoyed it and can’t wait to defend the title in 2020!

If you’re looking for championship-quality bioanalysis or Avengers-level bioanalytical support, get in touch HERE and one of our trophy winners will get in touch!